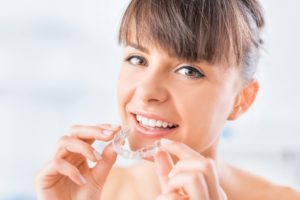 Invisalign was first introduced in 1997 in San Jose, California, but it took awhile for this new method of straightening the teeth to catch on. People just couldn’t believe that something so easy to use and seemingly weak (come on, how strong can a little plastic be?) could actually move and straighten their teeth. Surely, you’d have to have metal bands, wires, and rubber bands pulling and poking to be the real deal, right?

Uh, wrong. The past 20 years have proven that Invisalign is incredibly effective and so comfortable. It’s really been a revolution in the dental/orthodontic world.

At Implant Dentistry of Florida, our patients love the Invisalign system that moves the teeth through the use of clear plastic aligner trays, rather than the traditional metal bands and wires.

Both teens and adults prefer Invisalign mainly due to the fact that wearing the clear aligners doesn’t make them a “metal mouth.” But there’s more to this revolutionary tooth moving system than that.

Here are five advantages of Invisalign over traditional braces.

About the only person who likes the look of traditional braces is that Jaws bad guy in the James Bond movie. Most people subconsciously avoid smiling and opening their mouths fully when they’re sporting metal braces. In contrast, Invisalign aligners are virtually invisible, even when a person is talking to you in close proximity.

Who doesn’t’ like wires poking your cheeks and metal bands rubbing on your lips? Ouch. Invisalign trays are painless to wear. Plus, the tooth movement when switching the aligner trays every two weeks isn’t the same as the aching teeth that are a part of braces after “tightening.”

Metal braces place a tremendous amount of force on the teeth. Sometimes, this can cause a tooth or two to need a root canal after treatment. This can happen years later, but the trauma was caused by the brace on the tooth. Braces can also lead to decay forming in between teeth and around the bands because it is almost impossible to fully clean around all the wires and bands. Invisalign spreads the force across all the teeth at once, eliminating any single teeth receiving excess force and potential future trauma. Also, cleaning is simple — patients just take out their aligner trays and brush and floss their teeth normally.

Although Invisalign can’t be used for excessive tooth movement cases, it can be used for just about all mild to moderate cases of alignment. And it does it in less time. Invisalign usually requires from 1-1.5 years for treatment. Traditional braces can require up to five years.

You’ll know exactly what your final result will look like with Invisalign — you’ve already seen it in the initial 3D computerized movement projections used to plan your aligner trays. With metal braces, there can be more trial and error, so the final result isn’t fully known until it is final.

We congratulate Invisalign and Align Technology for their two decades of successful teeth straightening. Does Invisalign sound like something for your teen, or for you? Call the team at Implant Dentistry of Florida, (321) 372-7700, and let’s see if Invisalign can be right for you.