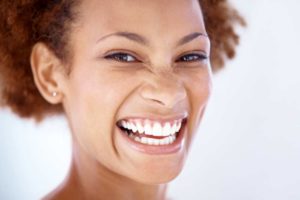 As we age, our gums can recede. When the gums recede, more of the tooth root is exposed. This can be due to a variety of reasons: overly aggressive brushing or flossing, genetics, grinding your teeth, tooth trauma, or poor oral hygiene. At Implant Dentistry of Florida, Dr. Brown is one of the few dentists worldwide that have been trained in a new procedure to rejuvenate the gums, bringing them back down lower on the teeth. The procedure is called pinhole gum rejuvenation.

How to get the gums to come back down?

Traditionally, the only way to address gum recession was with gum grafting. Tissue was taken from the roof of the mouth and transplanted under the gums down further onto the teeth (where the gums originally were). This created lots of sutures at both locations, and was very painful.

Then a new method was developed.

A new method for gum rejuvenation was developed by Dr. Chao. The Chao Pinhole Technique doesn’t rely upon taking tissue from the roof of the mouth. Instead, a small hole is placed in the tissue above the gums and then the gums are pushed downwards to cover the recession. Collagen is then placed into the hole to add structure and keep the gum tissue in place. In this method, there are no sutures and the holes to access the gums heal quickly, often in the first day.

Dr. Brown of Implant Dentistry of Florida is one of the few practitioners worldwide who has received training from the Chao Pinhole Academy, and is certified in this new procedure.

If you have receding gums, this new method of gum rejuvenation may be a great solution. Call us at 321-259-9429 and set up an appointment with Dr. Brown.